Praise and acknowledgement for the film’s strength and artistry are rolling in from all directions. You can view a full feature on the making of the film currently on Creative Scotland’s website: http://www.creativescotland.com/what-we-do/latest-news/archive/2016/04/scottish-film-wins-best-film-at-first-cut!-youth-film-festival

Mary McGrath from First Cut Film Festival has also congratulated the team. “The response from viewers was brilliant- they loved it & it was certainly a talking point- raising the bar and raising important topics for discussion. Above all it is a powerful, engaging, flawless film.”

Funded through Creative Scotland’s Cashback for Creativity, the F-GAZE (female gaze) project aimed to encourage more girls to take part in film-making, and to challenge gender stereotypes with females behind the camera and males in front of it.

Shot in areas of natural wilderness around Glasgow, The Old Lie is an experimental dance film which explores themes of war and innocence. It was choreographed by Natali McCleary, featured a cast of all-male dancers from Overdrive Dance Company, and took inspiration from Wilfred Owen’s classic poem, Dulce et Decorum Est. 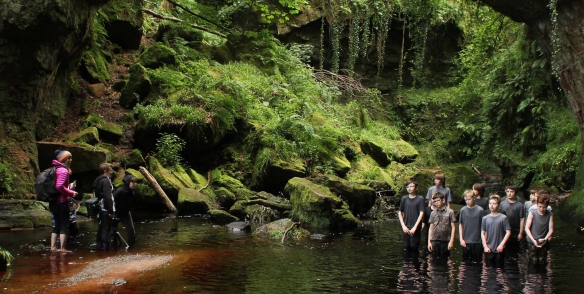 Catch this and some other cracking films