Following a major funding cut, Firefly Arts are crowd-funding in order to run our fabulous winter show project, along with other youth arts activity and events that are not supported by project funding.

With only 14 days left to run, the #WE ARE FIREFLY campaign is lying at 50% of its target. We need your help! Our young people are creative, proactive and resourceful, so please take the following 3 steps to support them:

All contributions are warmly welcome. There are some terrific rewards – so don’t forget to claim yours by using the ‘Select Reward’ button!

A heart-felt thank you to everyone who has supported this campaign so far, please spread the work and share the link as much as possible. Meanwhile here’s our current Wondrous Wall of Fame…

Team Firefly are delighted to introduce our new drama programme, developed specifically for use with primary-age children, and ranging from lunchtime and

after-school drama clubs to curriculum-base projects and CPD for teachers.

We can tailor projects to meet specific needs, explore particular issues and suit most budgets. For more information, or to discuss your project further, please contact Eleanor Morrison on 01506 333005 or email eleanor@firefly-arts.co.uk.

Following a major funding cut, Firefly Arts are crowd-funding in order to run our fabulous winter show project. Not just a show (however fabulous), but a life-enhancing project that supports children and young people into devising, performance, design, theatre tech, film, marketing and box-office roles. Our young people are proactive, resourceful and determined to save this unique opportunity to build skills, work creatively and collaboratively.

Please support us by using this link, #WE ARE FIREFLY to check out our crowd-funder site. All donations warmly welcome. There are some terrific rewards – so don’t forget to use the ‘Select Reward’ button!

Can we also ask you to share the https://www.crowdfunder.co.uk/firefly-arts link with as many folk as possible?

A heart-felt thank you to everyone who has support this campaign so far. The Wall of Fame on our #WE ARE FIREFLY tab, above, will be updated on a regular basis!

Welcome back to Firefly for an awesome autumn term! Despite the ongoing £inancial situation, we’ve enjoyed some great projects over the summer break. Play In A Week projects in Livingston and Linlithgow created two excellent, and certainly unique, shows, while song and voice workshops with young people from across West Lothian produced some amazing sounds.

Our young workshop assistants joined us for Firefly’s Fringe Day Out in Edinburgh, and we’ve been delighted to welcome back a host of ex-Firefly participants to film a fabulous fund-raising promo for our Winter Show crowd-funder campaign #WE ARE FIREFLY. Thanks to West Lothian Courier who covered this event last week, and more news on this over the next few days…

In fact we’ve lots of exciting and creative stuff to keep you (and us!) busy over the next few months, so keep an eye out here,  on Facebook and Instagram, to keep updated on all things Firefly.

Meanwhile we’ve still spaces in the following after-school drama workshops. Call 01506 333005 or email Alison on admin@firefly-arts.co.uk to find out more. 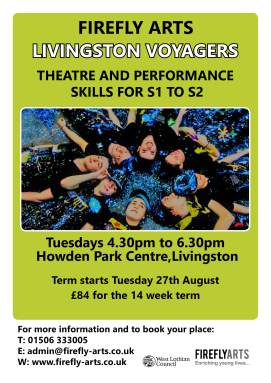 Having smashed it at this year’s National Festival of Youth Theatre (well done guys! See NFYT photos here), Team Firefly are now prepping for our summer holiday projects. Just a few places left, so get in touch double quick if you don’t want to miss out on all the fun.

Meanwhile don’t get so carried away with summer fun that you forget to register for our Autumn workshop programme. We’ve made some changes, so give us a call or email if you need more information before you book. 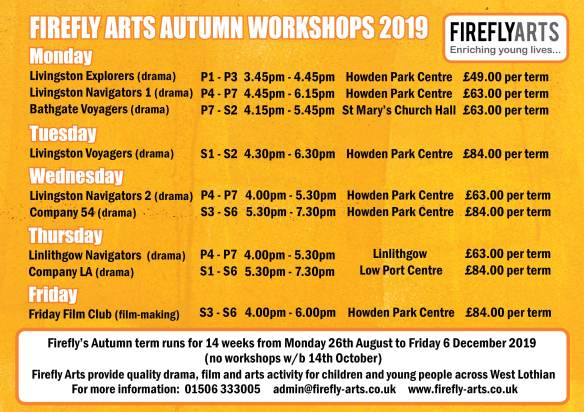 There are still some places left on our summer projects. Make sure that you don’t miss on the fun out by calling 01560 333005, or email director@firefly-arts.co.uk. 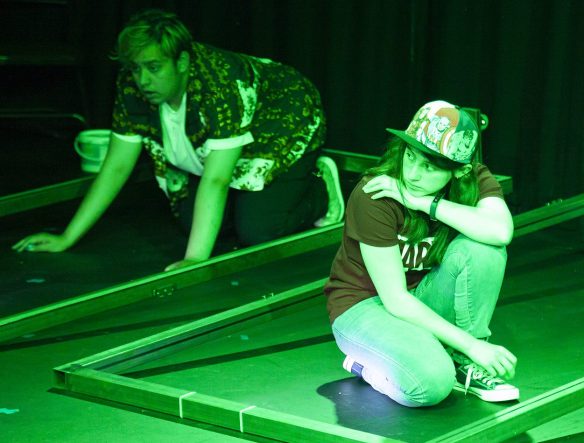 Congratulations to both casts, production and technical teams that put together Firefly’s sumptuous summer double-bill last weekend. Its been a huge amount of work, in particular for directors Kirsty Byers and Miriam Larrainzar, but the achievements of these young people and the quality of both performances were tremendous.

First on was Titus, created by our Bathgate Navigator group and after Shakespeare’s most gory play, Titus Andronicus. Beheadings, mutilations and people baked in pies are just some of the dastardly deeds in this searing tale of lust, madness and revenge. The young performers (P7 to S2) delivered Shakespeare’s text with passion and expression, alternating with now-speak to enable their shell-shocked audience to catch up on some of the more complex story-lines. An absolute treat to watch, Titus was shocking, fast-paced, beautifully produced and hilarious.

Second on was Firefly young company’s devised piece, Have Heart Know Fear. Sparsely staged with 6 performers wielding huge metal frames, this strange and dream-like production led us into a mirror-world of pain, fear, cause and effect. With strong and confident performances, the cast created a poignant, arresting and, at times, discomforting insight into the human condition. A significant achievement for all involved, not least for the level of open emotion required.

Have Heart Know Fear will be performed again at the National Festival of Youth Theatre at the Gaiety Theatre, Ayr on Friday 5th July.

Our thanks to everyone involved in these productions. Both shows were teched by young people who recently completed Firefly Theatre Tech training, stoically supported  by Lighting Designer Malcolm Rogan. They were fabulously designed and costumed by Jessica Brettle. Thanks also to Sinclair MacKenzie for the production photos.

Last but certainly not least, huge thanks to all the young people involved, their families and carers, and Team Firefly for their continued support in increasingly challenging times!

Don’t miss out on Firefly’s sumptuous summer double bill on Friday 7th and Saturday 8th June. Our Bathgate Voyagers will kick off with Titus, a unique interpretation of Shakespeare’s non-stop pot-boiler, Titus Andronicus;  and closely followed by Have Heart Know Fear, a devised and dream-like piece by Firefly’s Young Company.

Have Heart Know Fear will be performed again at the Gaiety Theatre Ayr, on Friday 5th July for the National Festival of Youth Theatre.

Some strong content, so performances are suitable for ages10+. For tickets and further information call 01506 333005 or email admin@firefly-arts.co.uk.

Firefly’s summer projects are already starting to fill up, so book your place if you haven’t done so already….

There are also a couple of spaces free on our weekend Theatre Lighting course on 25th and 26th May. You’ll need to be aged 14+, a regular Fireflier, and able to attend both sessions…

Welcome back, primed and fortified with Easter chocolate, for a packed and fun-filled summer term. We’ve a wide range of workshops, activities, projects, events, rehearsals and performance lined up over the next few months, including our regular after-school drama and film-making workshops at Howden Park Centre, St Mary’s Church Hall in Bathgate, and Low Port Centre in Linlithgow. See below for details. 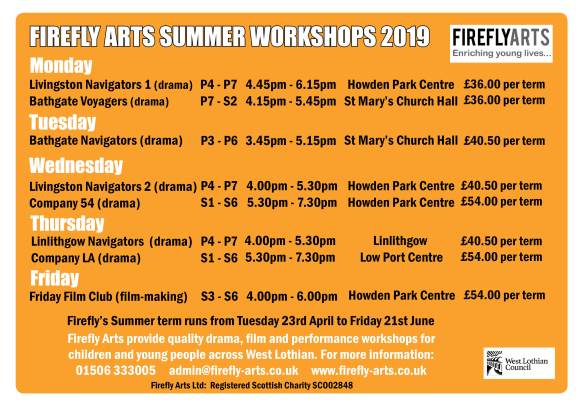 Curious Histories. Interactive performances on Wednesday 1st and Thursday 9th May to mark the re-opening of Linlithgow Museum by children at local primary schools.

The Duchess of Malfi at the Lyceum Theatre Edinburgh. Opportunity for our older participants to experience a new and contemporary take on Webster’s dark and gory tale of revenge.

Meanwhile keep up with happenings, news and events through Firefly’s Facebook and Instagram sites, email admin@firefly-arts.co.uk or call us on 01506 333005. 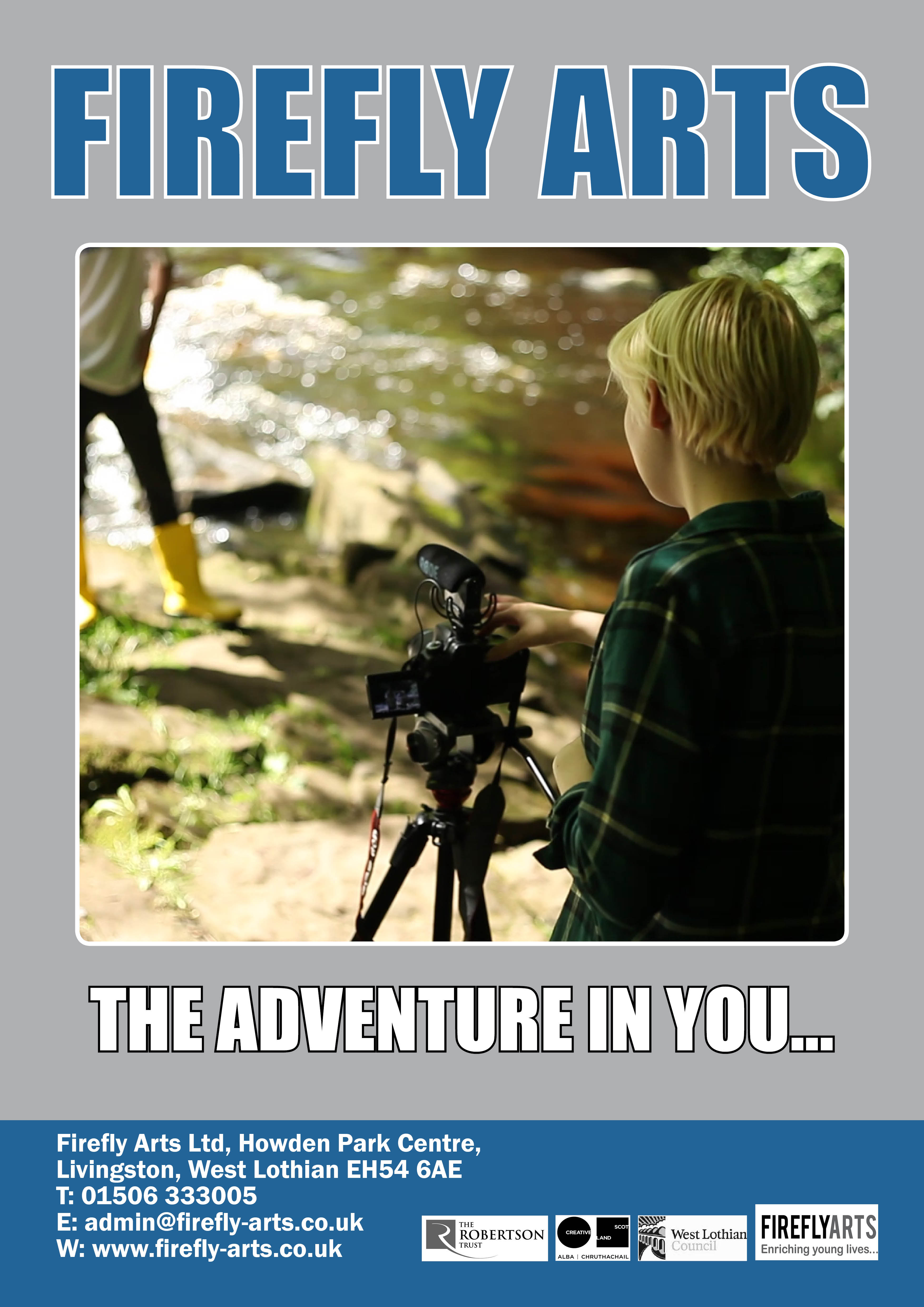 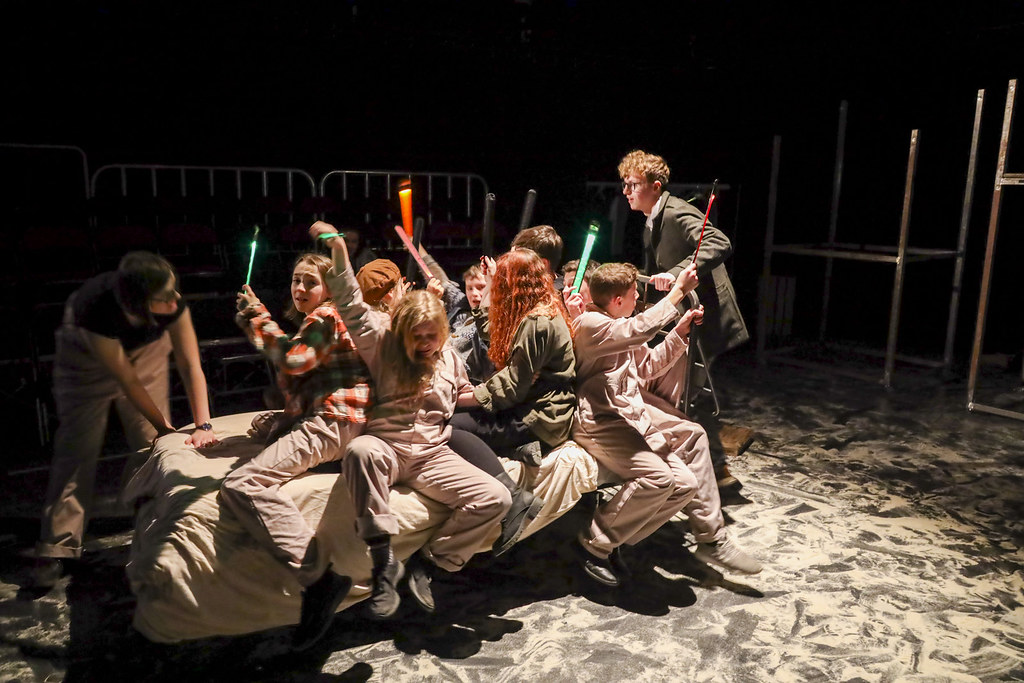 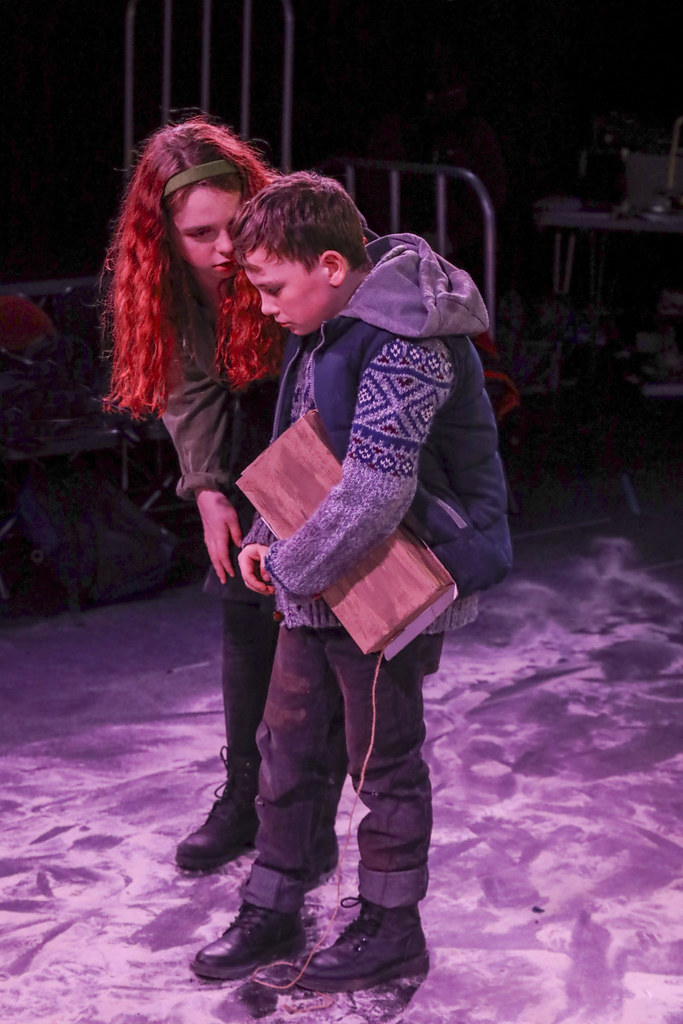 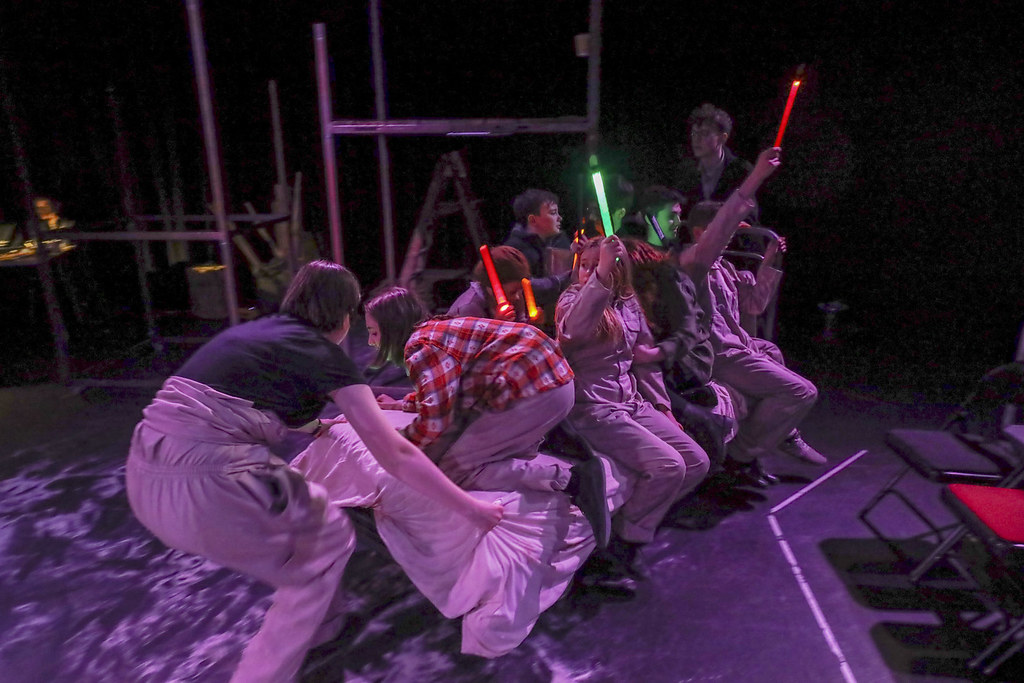 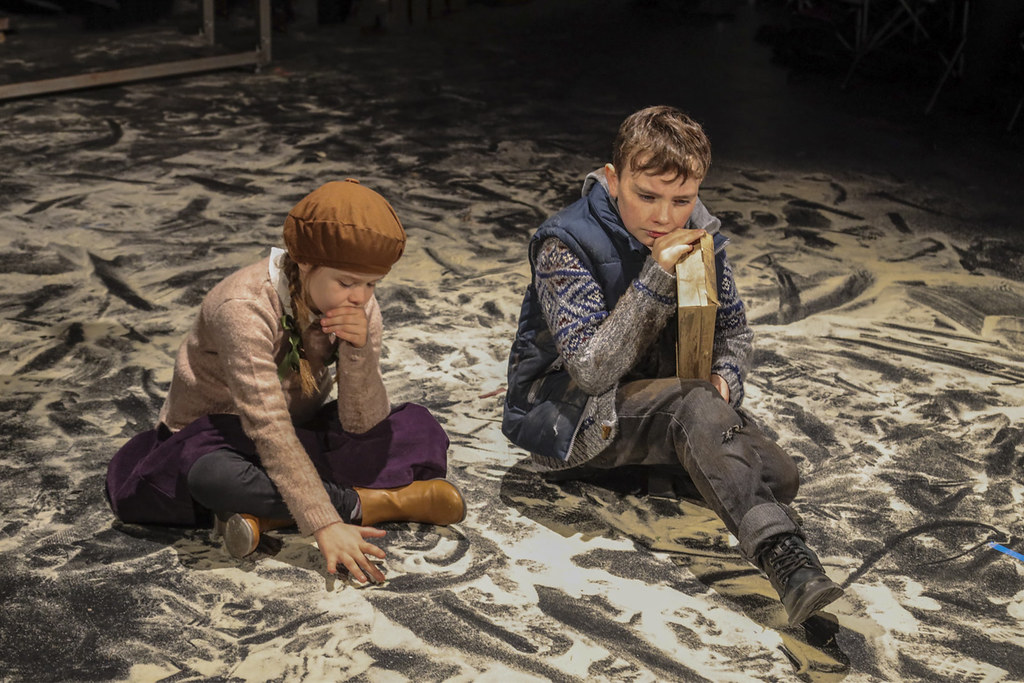 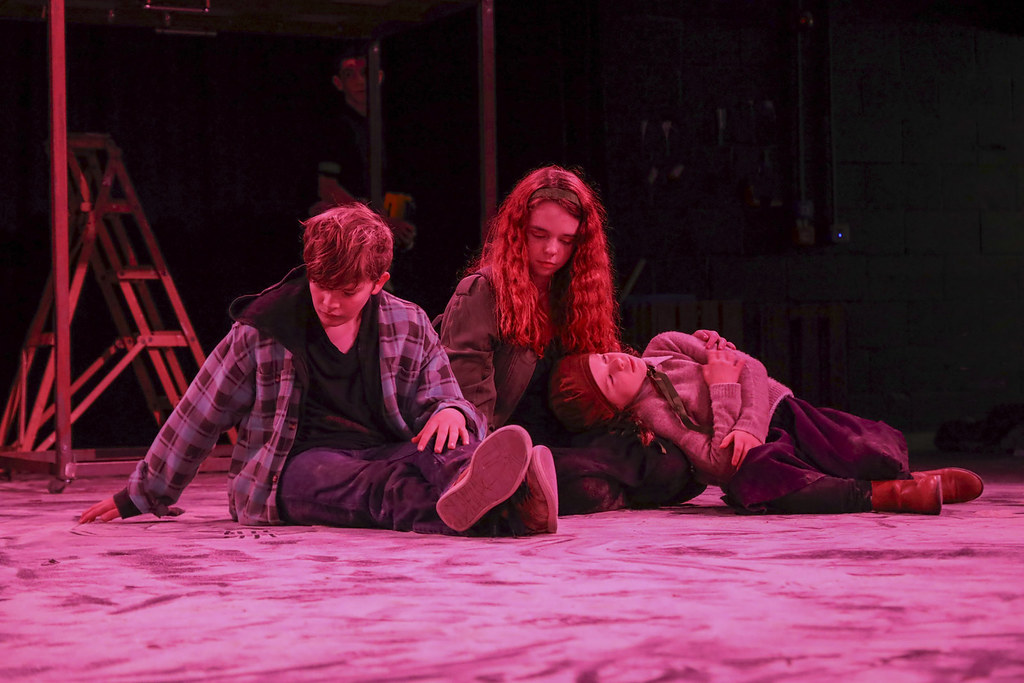 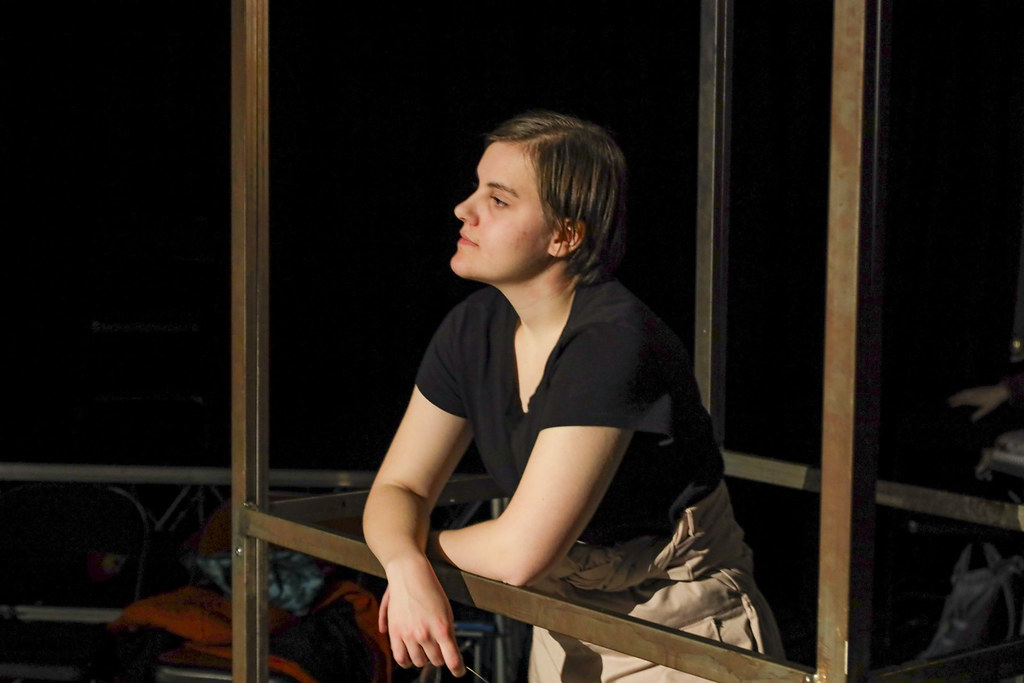 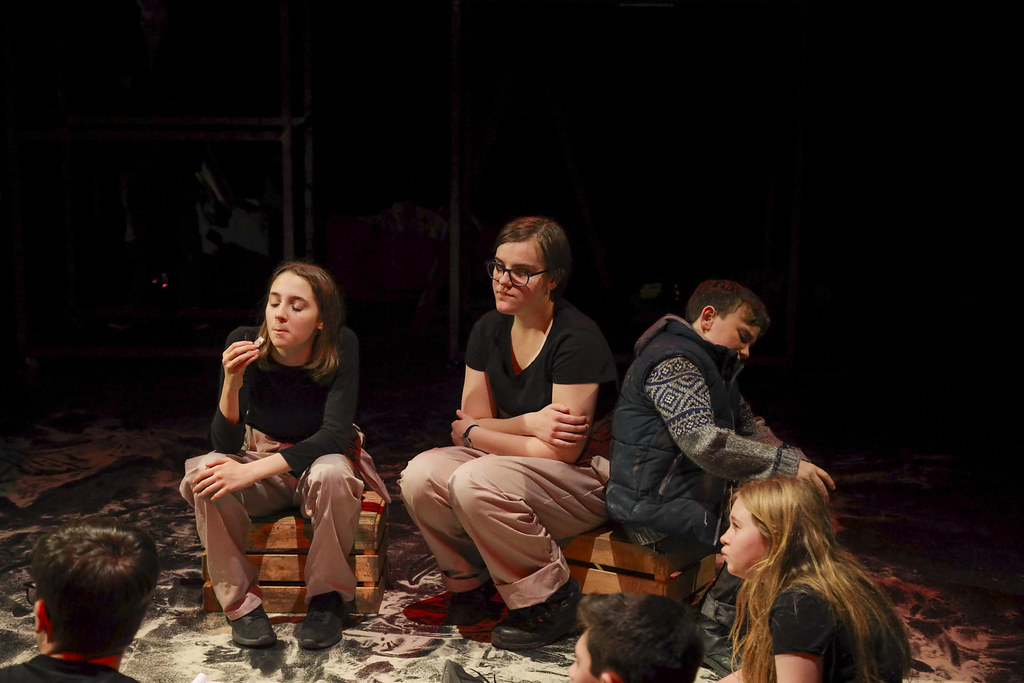 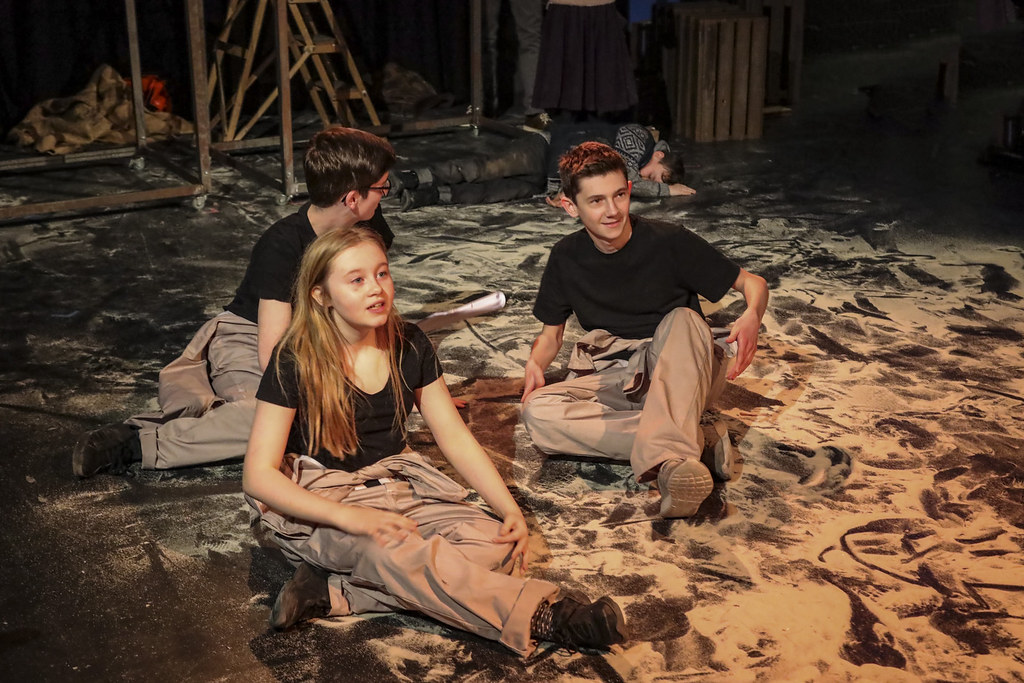 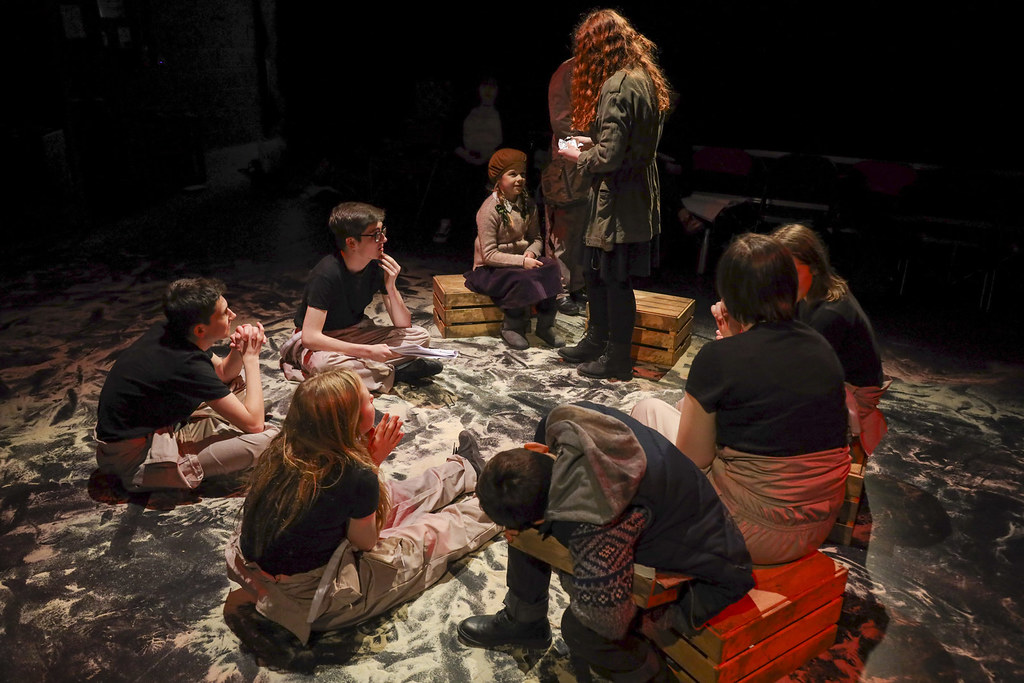 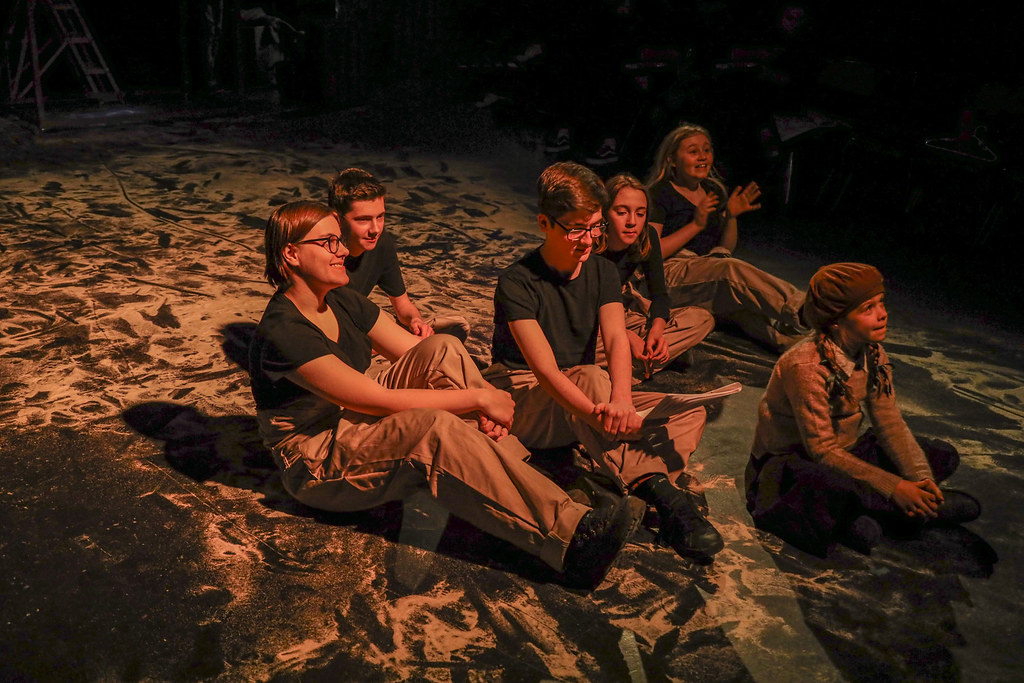 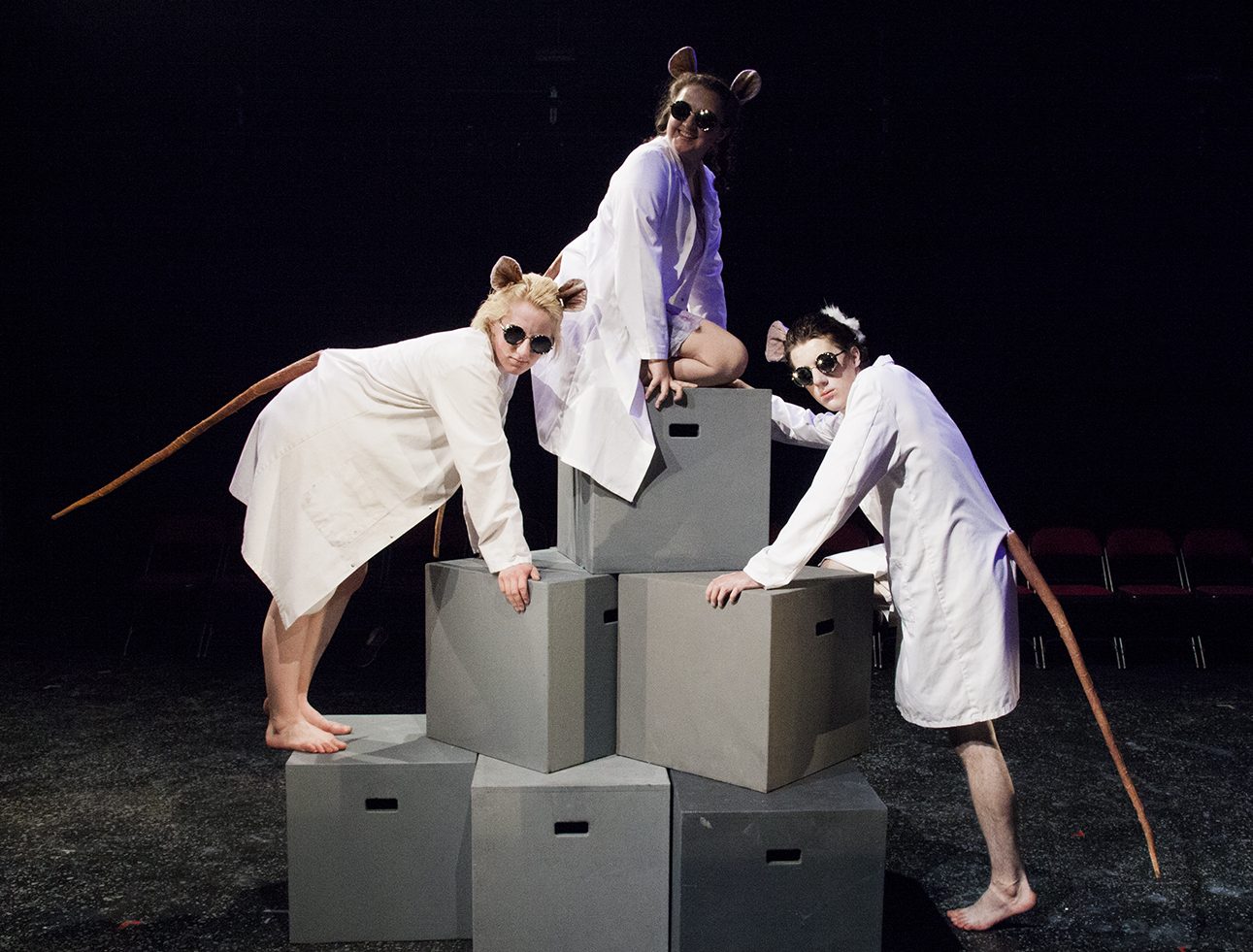